In New Jersey, an employment discrimination claim can be based on conduct severe or pervasive enough to make a person in a legally protected class believe that the working environment is intimidating, hostile or abusive. However, courts have disagreed on what level of conduct meets the “severe or pervasive” threshold. Now, the New Jersey Supreme Court has held that two offensive slurs directed at a Hispanic employee by a supervisor could be enough to amount to a hostile workplace.

The lawsuit was brought by Armando Rios, Jr., a Hispanic male who was the director of brand 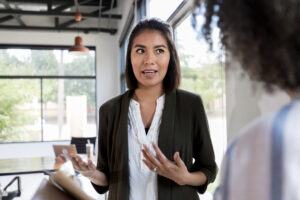 marketing for Meda Pharmaceutical, Inc., then located in Somerset. Rios alleged that his direct supervisor, Tina Cheng-Avery, twice used offensive slurs related to his ethnicity. Rios reported each alleged incident to the director of human resources but did not file a written complaint in accordance with Meda’s established policy.

Cheng-Avery denied making either statement. The next year, she placed Rios on probation and later terminated his employment, citing “poor performance.” Rios then filed his suit under the New Jersey Law Against Discrimination (LAD), which prohibits discrimination based on race, national origin or ancestry, among other protected classes.

The trial court granted the defendants’ motion for summary judgment, finding that the two alleged comments did not rise to the level of “severe or pervasive” necessary to create a hostile work environment under the LAD. The Appellate Division affirmed the lower court’s decision, finding a lack of corroboration for the alleged remarks or evidence that Rios suffered any adverse consequences.

However, the state Supreme Court held unanimously, in Rios v. Meda Pharmaceutical, Inc., that the appeals court wrongly focused on what are actually issues for a jury. The justices found that prior case law “did not establish a floor or set minimal factual requirements for a hostile work environment claim.” They vacated summary judgment and remanded the case for trial.

The ruling underscores that the New Jersey LAD is one of the strongest anti-discrimination laws in the country. Employers are prohibited from discriminating in hiring, termination, promotion, compensation and all other aspects of employment. The state Supreme Court is vigilant in enforcing the LAD, taking a broad view of what may constitute workplace discrimination.

If you’ve been subjected to discrimination in the workplace, you have the right to take legal action to hold your employer accountable. Kevin T. Kutyla, Esq. in Succasunna offers qualified counsel and reliable advocacy in employment law matters. The firm represents clients in Sussex and Morris counties and throughout New Jersey. Call 862-354-8931 or contact us online to schedule a consultation.